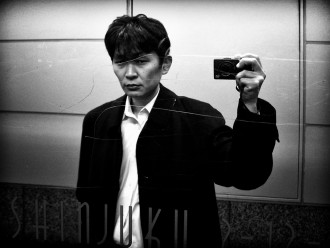 Born in Tokyo Japan in 1965, Tatsuo Suzuki is a Tokyo based amateur photographer with a nine to five day job[1]. He started taking photographs in 2008. Initially photographing in colour, his signature black and white style quickly emerged.

In terms of workflow, Tatsuo Suzuki favours digital rangefinder style cameras such as the Sony RX1 and Fuji X100s. He sometimes employs built in flash to enhance the graphic quality of his high contrast images. The images, taken in colour, are converted to black and white and enhanced using Nik Silver Efex on a PC[2]. He favours high contrast warm toned images.

For presentation of his work, Suzuki is a prolific user of social media with portfolios and single images simultaneously showcased on multiple platforms (e.g. Flickr, Twitter, 500px, Pixu, Pixyblog, Kujaja, 1x, Facebook, Tumblr, and Pinterest). Accompanying text is minimal, usually one word descriptive titles such as Portrait, Mirror, Girls, etc. However, the majority of photographs are untitled.

Suzuki concentrates exclusively on Tokyo street portraiture. His work is characterised by a high degree of empathy for his subjects.  In a July 2013 interview with streetviewphotography.net, he stated: “I’m into the people, so I shoot people mainly. I would like to express their passion, feeling, pain and more.  Not interested in cool composition shots.”1

Suzuki treads the streets of Tokyo’s Shinjuku district made famous by the doyen of Japanese street photographers Daido Moriyama (1938-). However, the work of the two men – a generation apart – is quite distinct.

The older man is known to have been influenced by William Klein’s (1928-) Tokyo imagery of the 1950s[3] and one can see the same influence in Suzuki’s work. These influences are different for each man though. They both share Klein’s emphasis on people and their life on the street. Similarly, they both employ strong graphical motifs such as high contrast, road markings, strong shadows, and repeating patterns (zebra crossings, light effects and clothing especially).

However, there are significant differences in Tatsuo Suzuki’s work.  It displays none of the eroticism and frayed morality evident in Moriyama’s portrayal of Shinjuku. In the 1960s and 1970s Shinjuku was populated by bohemians, gangsters and prostitutes – much like London’s Soho and New York’s Times Square – but like them, it is today a less edgy environment.  Perhaps this change, in part, accounts for the warmer more connected relation to the people Suzuki photographs. Yes, we can find examples of suspicious glances and existential alienation in his work but, for the most part his subjects smile or are unaware of his presence. His work doesn’t display the distress apparent in many of Moriyama’s subjects nor the aggression in Klein’s.

Suzuki is nonetheless a sophisticated photographer with wide artistic tastes. His Facebook profile demonstrates eclectic tastes in music (punk and free jazz) and cinema (Tarrantino and Goddard). His work has an edge that depends more on its graphic quality than the spectacle of its subjects.

Tatsuo Suzuki possesses a gentle sympathetic eye which, allied to his obvious cultural awareness both about photography and other art forms, lends his work a visual power and human engagement that holds the gaze.

(Thanks to Tatsuo for reviewing this article and giving permission to use his image.)