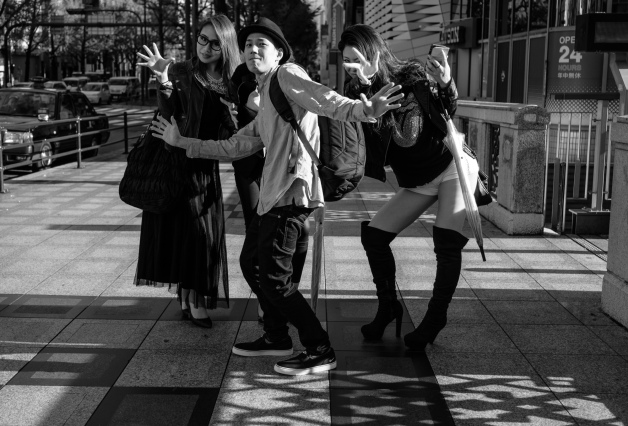 Like any other cultural practice, street photography is a product of its time and place. Familiarity with the history of the genre and its varied traditions makes photographing in different places all the more interesting. It’s fascinating to consider how places have changed visually and if – as an outsider – we can capture defining aspects of the contemporary culture as earlier local photographers did in their times.

Street photography of that period was dominated by humanistic concerns. This was particularly evident in the so-called French ‘Humanist School’ after the second world war.

The reputations of some of the world’s most renowned photographers were forged at this time, e.g. Frenchmen like Henri Cartier-Bresson, Robert Doisneau, Wily Ronis, Édouard Boubat and, a decade earlier, Hungarian émigrés such as André Kertész and Gyula Halsz (Brassaï) among them.

Similar humanist concerns were present in British photojournalism of the period. Photographic projects such as Bert Hardy’s documentation of living conditions in Liverpool’s Chinatown (1942) or Roger Mayne’s record of working class life in London’s Southam Street (1956-61) are examples. However, there was less romanticism and more social concern among British photographers.

In New York in the 1960s and 70s, street photographers reflected a growing concern with identity politics by exploring issues of race, gender, sexuality and existential concerns such as personal experience, angst, and alienation within crowded cities. Work by Gordon Parks, Dave Heath, Peter Hujar, Diane Arbus and Bruce Davidson – among many others – are diverse examples of these concerns.

Japan also developed it’s own style of street photography in reaction to the use of photography as propaganda during world war two (and deliberate Americanisation afterwards).  Ken Domon and Ihei Kimura pioneered ‘photo realism’ to show devastated Japanese cities and the daily struggles of citizens. This was developed further by photographer’s associated with the short lived magazine Provoke (late 1960s), e.g. Shomei Tomatsu and Daido Moriyama. The Provoke-era photographers fused a more subjective approach onto ‘photo realism’ to reflect personal experience in a newly rebuilt Japanese cities.

The reason for this historical detour is to bring me to my recent experiences photographing in Japan. Destination Tokyo is something of a pilgrimage for a street photographer and I was super excited to visit.

Sadly, in Tokyo, I found myself feeling alienated by the sheer volume of people around Shibuya and Shinjuku districts. The scale of the city makes the individual feel very small. This made photographing more difficult than expected.

Certain aspects of the visual landscape of Tokyo are inescapable. Population density is evident in crowded road crossings as noted. Large scale bold black and white street crossings are everywhere there are metro stations or large intersections. These contrast with the neon encrusted narrow streets of densely packed areas like Kabukichō with its bars, eateries and hostess clubs.

Ironically, despite their busyness Japanese cities are very quiet compared to Western ones. No people shouting, street music or blaring car horns here. This has the strange effect (in Tokyo) of reinforcing the sense of being insignificant amidst a great flow of people around the streets at peak times.

Personally, I found Tokyo too much of a challenge in the few days I was there. Just not enough time to get past the feeling of separateness from the city. This was disappointing as I always feel the key to getting good street photographs is to feel the energy of a place and to get in step with its natural rhythm and pace.

By contrast, this is exactly what I felt happened in Osaka. The vibrancy and youthful energy were addictive and I found myself photographing from very early morning (6a.m.) until late evening. Japanese cities are very safe. Photographing might be met with mild irritation and avoidance but not major hassle.

In fact, the major issue photographing in Japan was escaping one’s familiarity with other photographer’s work. I’m not sure I succeeded on this first trip but, you decide from the images below. 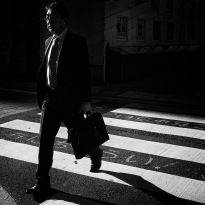 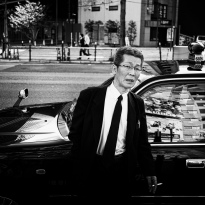